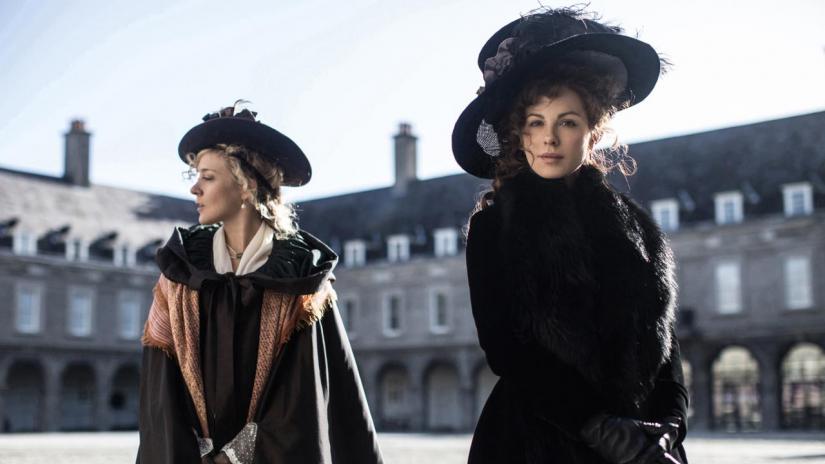 Article taken from Den of Geek!

There is a certain etiquette and level of decorum that comes with Jane Austen adaptations. They can be prideful and they can be prejudiced, but they must above all else be able to do it with the proper amount of propriety. Perhaps this is why Love & Friendship is so delightfully wicked. Playing as if all the characters have seen their fair share of Sense & Sensibility films too, Whit Stillman’s devilishly self-aware costume drama is as dangerously beguiling as star Kate Beckinsale’s scandalous Lady Susan, a woman who can be called many things, but never proper.

Indeed, by reteaming with his The Last Days of Disco leading lady a number of years later, Stillman and Beckinsale’s collaboration has gifted the actress with what might be a career best performance; it’s definitely an endlessly entertaining one. As Lady Susan, Beckinsale revisits the typically gilded ornamentation of her earliest genre films before the trip to Hollywood (such as Much Ado About Nothing and Cold Comfort Farm). But unlike so many projects in a form that can frequently be as stifling as a corset, Love & Friendship features the lightest of touches from both the writer-director and its performers, allowing for a film that cuts quite an impressive figure while being auspiciously naughty.

Based on Lady Susan, one of Austen’s earliest novellas that was not published in her lifetime (and which I have admittedly never read), this film adaptation seems like a perfect inversion of so many of the author’s now iconic tropes. Just as so many women who are no longer ingénues in these stories, Beckinsale’s Lady Susan Vernon has a daughter of marrying age named Frederica (Morfydd Clark). And also like the Mrs. Bennets of the world, the widowed Susan Vernon has finding a husband for Frederica on her mind—just near the back and right next to other trivial concerns like why it is only respectful for her not to pay her “friend” and unofficial maid, Mrs. Cross (Kelly Campbell).

What Frederica’s marital status turns out to be much more apropos to is meeting ever so many young men who are also in need of a wife, and who universally all lack the constitution to resist Lady Susan’s conversationalist charms. One such fellow who becomes enraptured with Susan, much to his family’s horror, is Reginald DeCourcy (Xavier Samuel). For here is a gallant young chap who thinks the world of his friendship with Susan, and refuses to hear the cautionary tales of men brought to ruin that are spun by one of Susan’s closest intimates, Catherine DeCourcy Vernon (Emma Greenwell)… Reginald’s sister and Susan’s sister-in-law.

However, there is also Sir James Martin (Tom Bennett), another suitor so dim that he is unaware that in his awkward courting of Lady Susan, he is being pawned off on Susan’s daughter—or that during their own long friendship that the Lady Susan is spending an awful lot of time with the married Lord Manwaring (Lochlann O’Mearáin) while his actual wife is nowhere to be seen.

It is all so tangled and sordid that Susan and audiences can be thankful there is at least one actual eponymous relation of affection in the whole affair—Lady Susan’s long-term conspiratorial sisterhood with Alicia Johnson (Chloë Sevigny), an American every bit as crafty as her best friend, if only she hadn’t married Mr. Johnson (Stephen Fry), a man who is just one more scandal away from shipping Alicia off back to Pennyslvania. “What a mistake you made marrying him,” Susan chides. “Too old to be governable, too young to die.”

The trick of Love & Friendship is it’s so joyfully constructed by all participants involved that one suspects he has inadvertently stumbled upon an after-dinner parlor game which is making great sport at the chosen genre’s archetypes. It is also impossible to resist laughing along. Presenting a hilarious deconstruction of the form, as well as a simultaneous embrace of its appeals, Stillman offers an enticing cinematic confection. The screenplay also makes shrewd use of (what I assume is) Austen’s quick-witted prose and sharp wordplay, complementing the picture’s fast-moving direction. At times, the overall effect flirts with being pure screwball in spite of its 19th century setting.

An unapologetically selfish, manipulative, and amoral character, Lady Susan is a bit of a revelation in a genre that always pushes the adulteress in the margins as she frolics toward an inevitable reckoning in the final hundred pages. By contrast, Susan is never truly punished nor deserving of an iota of scorn here. Suggesting an almost modern sensibility, Susan is merely too clever by half than all the people around her, and she is perfectly blameless if they are ensnared in any of her drawing room traps or machinations.

Within this formidable creation, Beckinsale personifies both the allure of such a schemer, as well as a surprisingly razor-edged viciousness to her good-natured banter, which somehow makes the whole creation so much more charming. Consequently, the actress holds a center of gravity in this film that is immediately disarming—much to the peril of all the men in her orbit.

Morfydd Cark is also quite pleasant as a more traditional Austen protagonist, albeit Frederica’s nightmare only begins and ends when her mother is in the room. Sevigny and Bennett also excel at finding humor in characters at opposite ends of the grace and intelligence spectrums.

Ultimately, Love & Friendship is the kind of affair that would earn Lady Susan’s approval: one where all parties leave satisfied and without reason to complain.