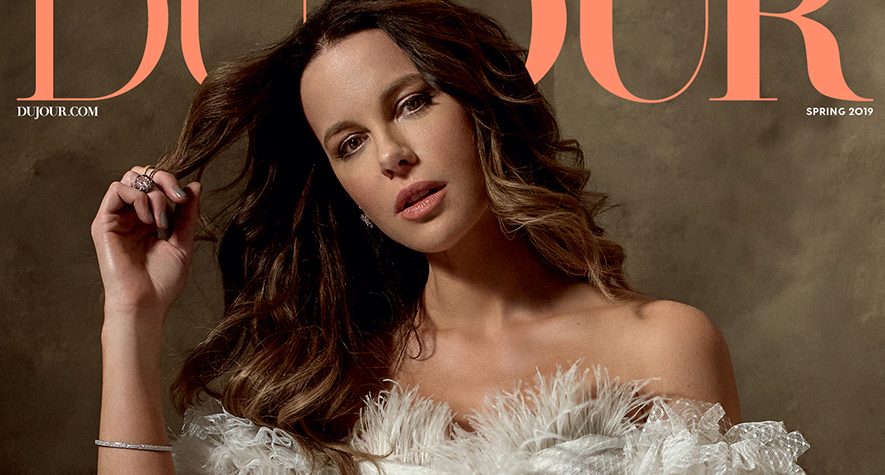 Kate is the featured star of Spring 2017 Issue of Dujour Magazine. Here is the cover and the beautiful photoshoot and the interview from Dujour website. Make sure to pickup your copy if you have an iOS display with their app.

Captivating Kate Beckinsale
With a new leading role under her belt and a “leap of faith” outlook on life, Beckinsale is better than ever

It’s an icy afternoon in New York City, and Kate Beckinsale, who just flew in from her home in balmy Los Angeles, is feeling pretty f-ing frigid. We’re cozied up at a corner table in the lobby of her hotel, soaking up every last ray of sun streaming through the windowsill. It’s at this particular moment, in the blinding rays of daylight, that I come to the conclusion that Beckinsale, who is being extraordinarily British as she orders up an English breakfast tea with milk, is damn near perfect. She is witty, sarcastic, hysterical, and intelligent, not to mention the obvious: She is drop-dead gorgeous. But the best part of all of it just may be that she seems completely unaware of her sensational beauty, both inside and out. Twenty-four hours earlier, we spent all day shooting our cover story at The Beekman hotel’s stunning turret penthouse downtown. Beckinsale, again in the freezing cold, modeled hot pants and crop tops like a champ. Meanwhile, I stood in the corner in cashmere shivering like I was naked in the middle of the Antarctic. Perhaps it’s this same diligence and utmost dedication to the task at hand that is responsible for her métier in acting.

In her upcoming role in Amazon’s television drama series The Widow, Beckinsale plays a recluse who has just lost her husband and is on the verge of a nervous breakdown. That in itself seems like a challenge, but there were a few layers to this role in particular that she says made it one of the most challenging of her career thus far. For starters, the series was shot in Africa, so accepting the job meant moving far away from her L.A. home (and her 20-year-old daughter, Lily Mo) for six months. “It was the first job that I was offered where I said, ‘Well, I guess I can do this now, because my daughter just went to college, and I can’t say, No, I have to be home,’” she says. “I’ve been saying when she leaves home I’ll have all this creative freedom, and then literally the moment she steps out the door, they called and said, ‘Do you want to go to Africa for six months?’ and I’m like, ‘No, I can’t, I’m still at home sniffing her socks and going, I’m not ready!’ It was kind of a leap of faith on a lot of levels, and I feel like I’m kind of into the whole idea of a leap of faith.”

Moving to the other hemisphere aside, she also had to get into character in a completely different way than she was accustomed to. “There’s eight episodes, so the first three months you’re shooting any number of the first four of those episodes,” she says. “I’ve never filmed like that, and I’ve also never done a shot where I didn’t know what was going to end up happening to the character. You’re out there filming for two months and suddenly you go, ‘Oh, this is the ending,’” she says. The other challenge was the weather itself. “It was incredibly hot—so hot that I ended up getting taken to the hospital one day for passing out! I just keeled over into this very nice, huge actor, which was lucky,” she laughs. “Friend for life!” What little downtime she had while there, though, she spent safari-ing. “I brushed a lion with a hairbrush at one point; he was chilling.” NBD.

For an actress with such a strong list of accolades, she surprises me when she tells me there are many things she still wants to accomplish in her career. Beckinsale, 45, studied Russian and French during her years at university and wants to add foreign films to her résumé. “I’d like to do a movie in French,” she says. “And I’d love to do more comedy. It takes people a minute to care about whether a woman is funny or not, I think.” When digging into her favorite roles of all, she says, “I have certain favorite things because they were so far away from my sensibility that I’m amazed I got away with playing them,” she hoots. “Like Underworld, I would have never expected. Then I got completely typecast, which was annoying.” She also played John Cusack’s romantic interest in the 2001 rom-com Serendipity and starred in the Oscar-winning film Pearl Harbor as a Navy nurse whom Ben Affleck’s character falls in love with. Not too shabby.

When she’s not working (seemingly a rarity), Beckinsale is often photographed by the paparazzi running around town in the highest of stilettos, no matter if she is running errands or headed to the airport. How the hell does she do it? “I love a heel,” she says with full-on affection akin to that of a golden retriever puppy. “When I was very young, my feet grew before the rest of me, so I always felt like I had these sort of ski feet,” she laughs. “If I ever put on a flat shoe, it brings me back to that feeling of being nine years old. [I look down] and I’m like, ‘Who has these big banana feet?!’”

Heels aside, KB describes her style as a mix of “gym, lingerie, and bridal” but wishes she could wear gym clothes most of the time. She says of Hollywood style, “I love when someone has a look, and you can walk past a rack and say, ‘That’s her’; I just love that. I like when people are who they are.” She also misses the old days of individual style. I think there’s something kind of homogenizing about it now,” she says of red carpet fashion. “It’s great that everyone has a stylist and makeup artist these days, but when I started, we did our own hair and makeup for premieres, and we looked fucked up all the time,” she says with a laugh. “There are some terrifying photographs of me before I figured out you don’t just draw concealer all over your face. I didn’t actually know that foundation was a thing!” She says that the elevated makeup leads to constant false rumors about going under the knife. “[Tabloids] do a lot of, ‘Oh, look at how much plastic surgery she’s had done,’ and I’m like, ‘I could look like that right now if I did that exact makeup!’” She then, with a look of pride on her face, recounts her first-ever red carpet experience at the Cannes Film Festival, way before the days a stylist existed in her world. “I was 18, and I wore my dirty old scuffed steel-toe Doc Martens on the carpet, because I didn’t know other shoes existed,” she laughs. “Even though it’s a bit embarrassing when those pictures surface, I’m glad I have them, because you’re inventing your personality, and at that point I was like, ‘Fuck it, I’m wearing my Doc Martens.’”

Whether Doc Martens or Jimmy Choos, one thing doesn’t change when it comes to her red carpet style: what happens when she gets home from one. “It looks like somebody’s combusted,” she says with that wit that has made it such a pleasure to hang out with her these past few days. “The dress and shoes and literally everything goes on the floor, and the cat starts sniffing it. I put on sweatpants immediately, then draw myself a bath.”

Finally, no interview with Kate is complete without talking about her beauty routine since she is, obviously, one very beautiful human. She says something that shocks me, which is that she never actually had any semblance of a beauty routine until just recently. “I’m a really big fan of face oil; that is my recent discovery,” she says. “So you get a really nice oil, and after you take your makeup off, you massage it into your face; then you do five rinses with warm water, and then five rinses with cold water.” She also swears by sheet masks, though she says you’ll never see her wearing one on an airplane. “I’ll come downstairs with one on, and my mum or daughter is in the room, and everyone screams like there’s a murderer in the house,” she jokes. “You can’t do that to people on an airplane.”

Next, I have to get to the bottom of how she stays looking so incredibly fit, and she credits her longtime trainer Gunnar Peterson for her success in that department: “He makes it different every day so it’s not boring, and also he’s not boring. The truth is, I think I love exercise, but then I realize I just really love Gunnar.” She also credits his tough interval workouts with keeping her sane all these years. “I can’t believe I’m someone who is dependent on exercise, but I am,” she says. “I’ve never taken antidepressants—I probably should have at certain points in my life, but I find that if I regularly exercise, even if I absolutely don’t want to, I just feel better afterwards.” Working out coupled with regular visits to an infrared sauna, hot baths, and massage are on her list of favorite ways to unwind, as is hanging out with her favorite people. “I have really good friends who are really good fun; I’m so lucky. I get to scream Britney [Spears] in a car at 2 a.m. while putting on eyeliner, and that’s ideal to me.”

She seems to have a wealth of information and good advice, so I ask: What is the best piece of advice she’s ever gotten? No surprise here, her answer cracks me up. “People think that people go around dispensing good advice all the time, which they do not,” she wittily states. “I’ve really never been given any good advice. But I would say the best I’ve ever been given is something boring about taking your makeup off at night or always having your keys in your hand when you get to the front door; you know, practical shit to keep you from getting murdered.”